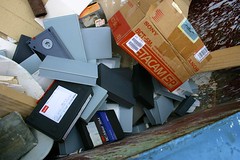 I think one of the reasons I like Flickr, the photo sharing site put together by Stewart Butterfield and Caterina Fake way back in 2004 (and sold, ca-ching, to Yahoo about a year later) is that not only do I get to upload and share my photos with the greater, uh, planet, but I do so in a way that makes each picture a post of its own…each one has a headline…sometimes a caption…and tags.

And, if you so permit, folks from the greater, uh, planet can add comments and generate a bit of a dialog right there on the page about what the image holds, signifies, or conjures up in their own overactive imaginations. (The picture of J.C. Salyer at top right, where he’s almost in the frame, even netted a quick comment from cofounder Fake herself.) I’ve ‘met’ some interesting people from the comments…neighbors, and people, well, anywhere.

And as a guy who used to really enjoy writing headlines back in the days when they involved equal amounts of copyfitting and wit, I try to put the same kind of work in the photo titles (which are, after all, little headlines) as I did in taking the picture. So I cobble together odd phrases like Watch this tower grow. and Ohio occurs in various colors. and The long shutter, en fuego. and teton zombieland. and But how do they hold the pencils? and Better than ‘Sindiana’ or ‘Swest Virginia.’ and Food that pleases at 2 am.

And yes, just like here, for some reason, the periods at the end of the headlines are important to me, so don’t mess with them, OK?

Some folks who upload (sometimes hundreds of) images don’t even bother to change the title, and so have a bunch of headlines resembling “IMG2137.JPG”, and some others elect to write little haikus of poetry in the tags, like:

…and I think all of these idiosyncracies make browsing through the 2 billion or so pictures all the more interesting.

And yes, there’s the actual photography too…the technical approaches and styles used to create Flickr images inspire imitators, trends, and way too much discussion. I don’t think it’s any coincidence that after a blizzard of uploaded tilt-shift fake photos —that’s a technique that takes the characteristic shallow depth of field you see in miniature photos…why the model railroad layout has sharp trains and fuzzy cars in the foreground—and applies that (often digitally) to real-world objects to make them look like tiny toys. Anyway, there’s an Allstate commercial out there now that uses the technique, and if it hadn’t become fashionable online, I doubt they would given it a go on Real Network Television.

So every few days I try to make sure I upload a few choice-ish pictures to le Flickr and I give my brain a little headline-writing practice and I get a small smile knowing that you there in Kuala Lampur can sit there and look at a picture of my old Apple //e or Bob Beasley operating a 1970s-era video switcher or ‘Bowling from the future!’—a bowling alley in Wapakoneta, Ohio.